Intercultural Dialogue and Imagining the Future in Oceania 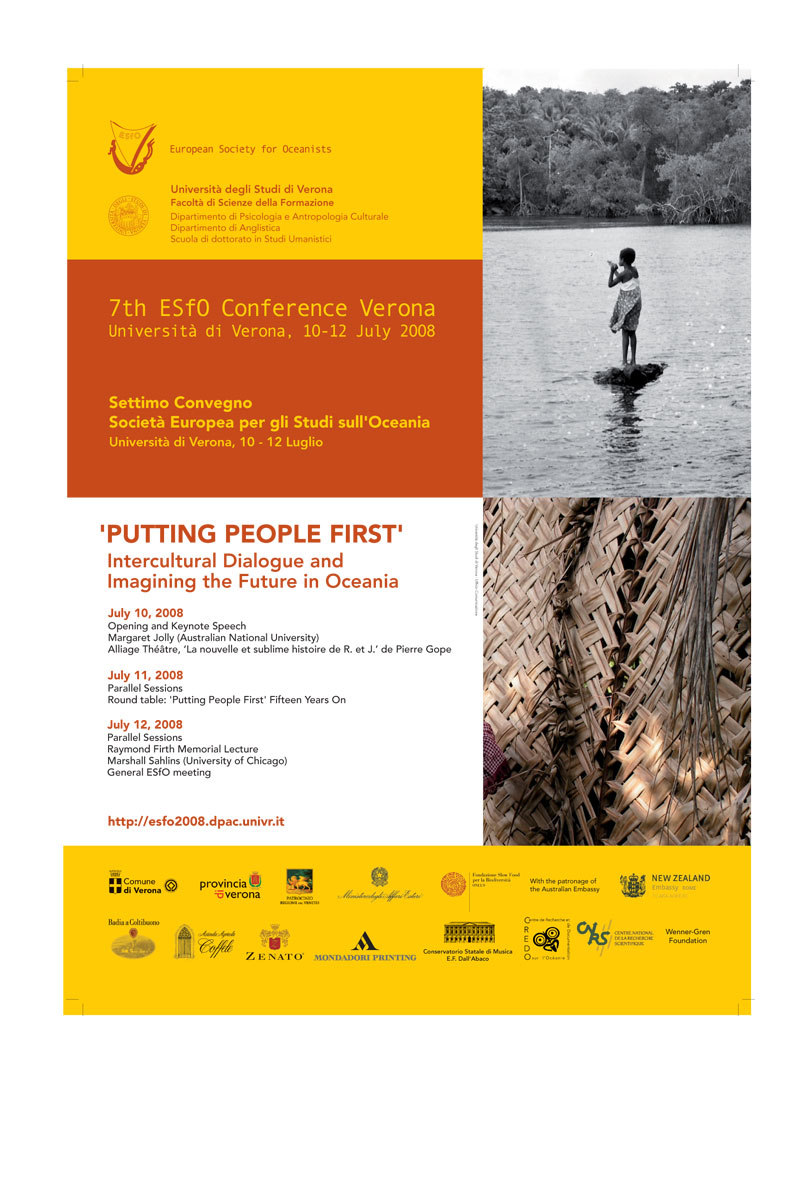 The theme for the seventh ESfO conference in Verona 2008 emphasises the pivotal role of intersubjective relations, at all levels of sociality, for contemporary islanders in their daily efforts to imagine desirable futures and ways to achieve them.

The first part of the title, “Putting People First” is inspired by the motto adopted in 1993 by the Pacific Forum in the “Suva Declaration” on Sustainable Development. It reflects Pacific Islanders’ own perception of a fundamental cultural value shared within the region: that of considering the people who form a community as its primary resource. The motto thus implies the articulation of an engaged process of responding to the challenges of our time, with Pacific Islanders’ desire to insist on this cultural prerogative.

The second part of the title, “Intercultural Dialogue and Imagining the Future in Oceania”, links this fundamental theme to those of previous ESfO conferences. We propose to build upon the debate on rethinking the past and on conflicts by turning our gaze to the present challenges facing Oceanian peoples who are striving to imagine their futures.

Intercultural dialogue is a crucial aspect of the promotion of peaceful cooperation between and within countries, and of effective relations at all levels of sociality. Oceania is an interesting site where conflicts, politics and ethnicities interconnect in old and innovative ways. A focus on dialogue and processes of negotiation, grounded in indigenous practice and in the visibility recently acquired, for example, by Pacific women’s groups in harnessing relations effectively, provides precious insights on the complexity of contemporary Oceania, and sparks a rethinking of similar processes in Europe and elsewhere, an antidote to the dangerous stereotypes fed by a view of culture as rigid and monolithic.

The emphasis on “Putting People First” can thus suggest an interesting perspective, weaving together intersubjective relations and the respect for biodiversity, within which to make sense of, and respond to, the controversies and contradictions of our times.

Finally, the routes suggested by the “Suva Declaration” are particularly consistent with the 2008 European Union’s Year of Intercultural Dialogue.