The 9th international conference of the European Society forOceanists was organized by the Bergen Pacific Research Group, under the supervision of the ESfO board. The venue was the Grand Hotel Terminus in downtown Bergen. The conference was sponsored by Wenner-Gren Foundation, the Research Council of Norway, the European Consortium for Pacific Studies (ECOPAS) and The University of Bergen. 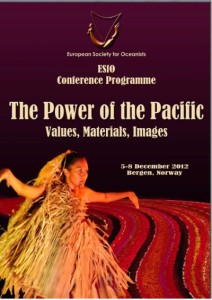 The conference theme – The Power of the Pacific: Values, Materials, Images – proved its potential for generating wide interest, and we were privileged to be able to welcome nearly 200 participants from about 20 nations, including not only most European countries, but also North America, Australia, New Zealand and a number of Pacific Island nations. The conference programme included the following:

The conference was closed by Dame Marilyn Strathern, who reviewed the content and contributions of the conference. Her view was that the conference theme had allowed for significant progress in placing the Pacific on the world map in relation to its importance as a site for innovation in economics, politics and as a central supplier of resources to the world market, and for closely conceptualizing how the history of the Pacific ties in with global history.